A selection of our best catches

A selection of our best catches

The guests of the Billfish Club Cabo Verde have been catching Grander regularly. 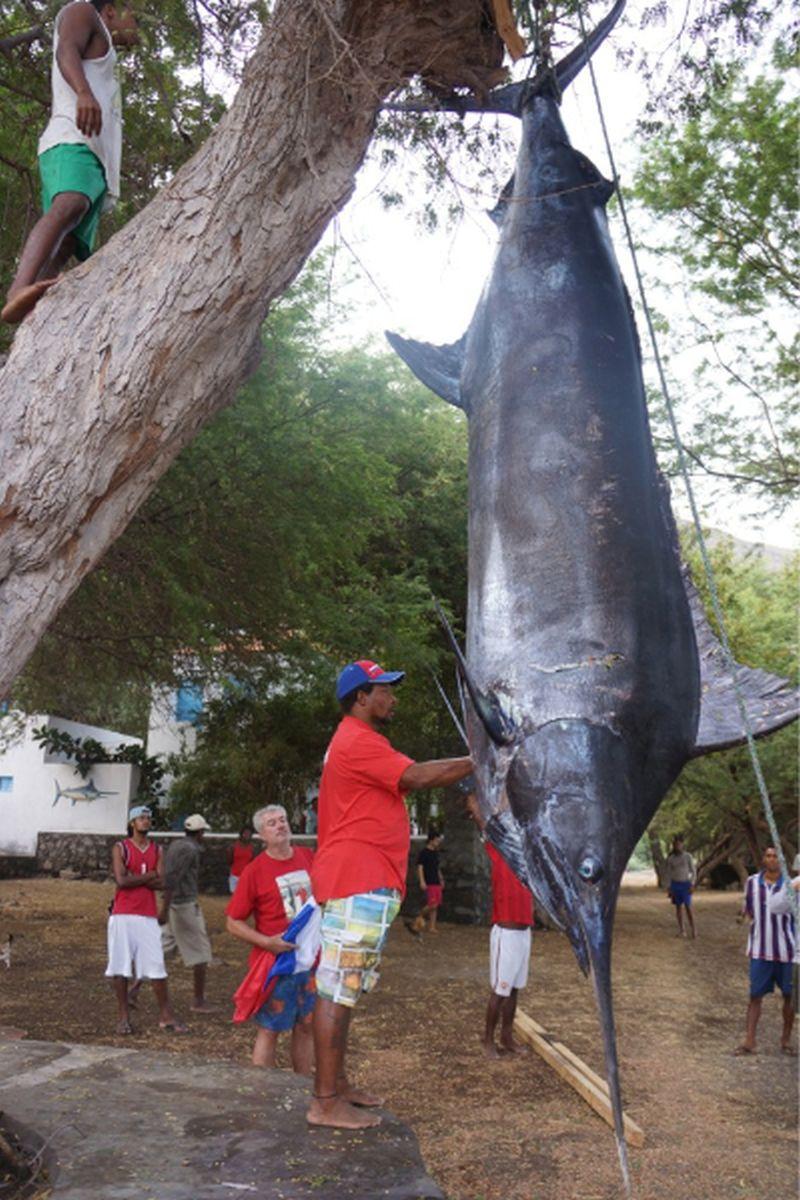 The bite took place on 20 July at around 5pm. We (angler: Alexander Trukhachev) were on our way back from Noreste Bank to Tarrafal, Santo Antão; still in deep water three and a half nautical miles from the north-westernmost point of the island. A perfect day to drill a monster marlin: beautiful blue water and flat, calm seas. The marlin bit on a “Bonze Mongrel Dog” in the short corner. After only 40 minutes, Tony was able to gaff the fish. However, with a good portion of luck on our side: The hook came loose exactly at the moment Tony placed the gaff. Tutu managed to hold the leader on the first try and so the fish had no chance to go deep. It was dark before we arrived in Tarrafal and so we were forced to leave the marlin on the beach until the weigh-in the next morning. Since a suitable tree had to be found first, we were not able to hang the fish until around 9 am. Fortunately, the “Bebiche” had a scale with her. 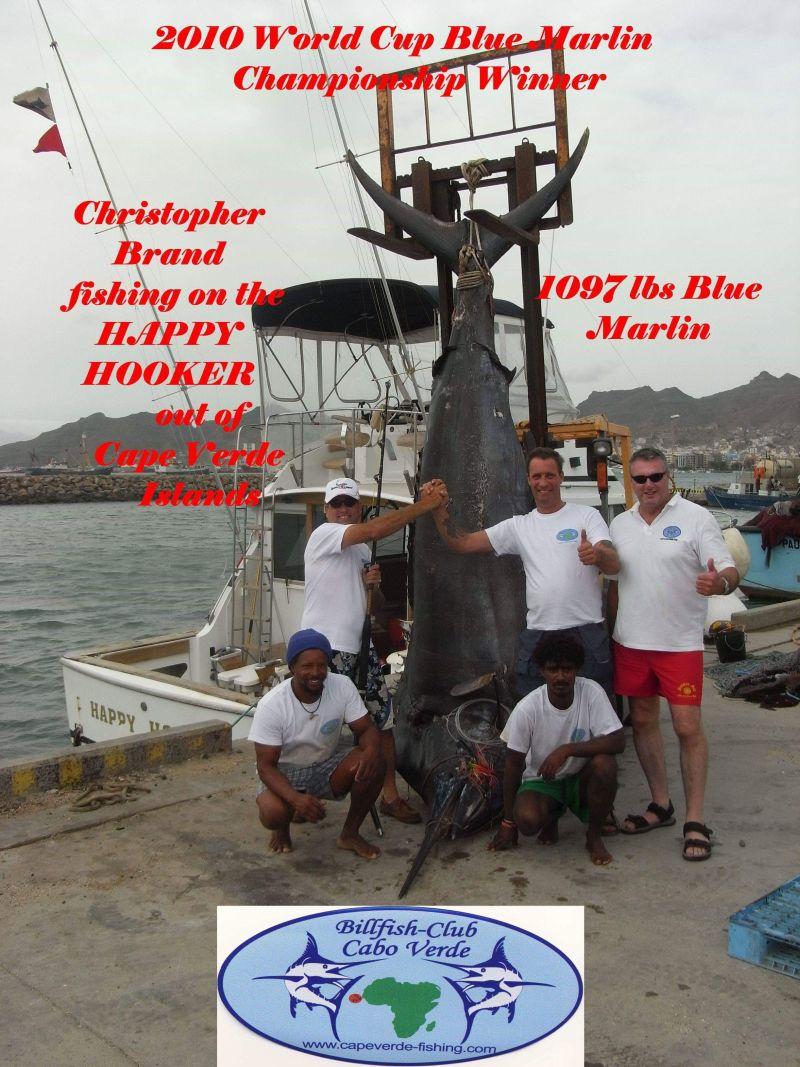 For the third time in the 26-year history of the Blue Marlin World Championship (World Cup), a Grander has won the event. Only one team wins the World Cup. There is no second place in the one-day worldwide competition, which takes place every year on 4 July. The winning team, which fished off Cape Verde aboard the Happy Hooker, consisted of captain Berno Niebuhr (Germany) and angler Chris Brand (Portugal). It was the first time in the history of the World Cup that a team won for the second time. Niebuhr and Brand had also won the 2006 event with an 850-lb blue marlin. Also on board for this historic catch were gaffman Amilton Gomez Barros, wireman Antonio da Cruz Gomez and Vincent Cox, who captured the catch on video.

A total of 149 teams participated in 17 locations around the world. Each team fished from 8.30am to 4.30pm in their time zone. Fishing begins near the International Date Line in Vanuatu and New Guinea and ends in Hawaii and French Polynesia.

Since the heaviest blue marlin over 500 pounds wins, immediately after the fish is weighed, the result is reported to the rest of the teams. They therefore constantly know what weight to beat and smaller fish can be released.  Before the Happy Hooker had reported the weight of their catch, three other fish had already been weighed. A team fishing on the La Onda Emma with Captain Wolfgang Maier, also off Cape Verde, caught a Blue weighing 511 pounds. Off the Canary Islands, the team on the Hedonist with Captain Manuel Ramírez weighed in a 600-lb marlin, and off Madeira, off the coast of Portugal, the team aboard the Audaz brought in a 546-lb marlin. Unfortunately, none of these teams had participated in the Big Blue Challenge.

The only two World Cup winners (before the Happy Hooker) over 1000 lbs came from Bermuda: an 1189-pounder caught by Martin Estis aboard the Tripleplay 2004 and Don Hunt’s 1195-lbs winning fish aboard the Challenger 1993. 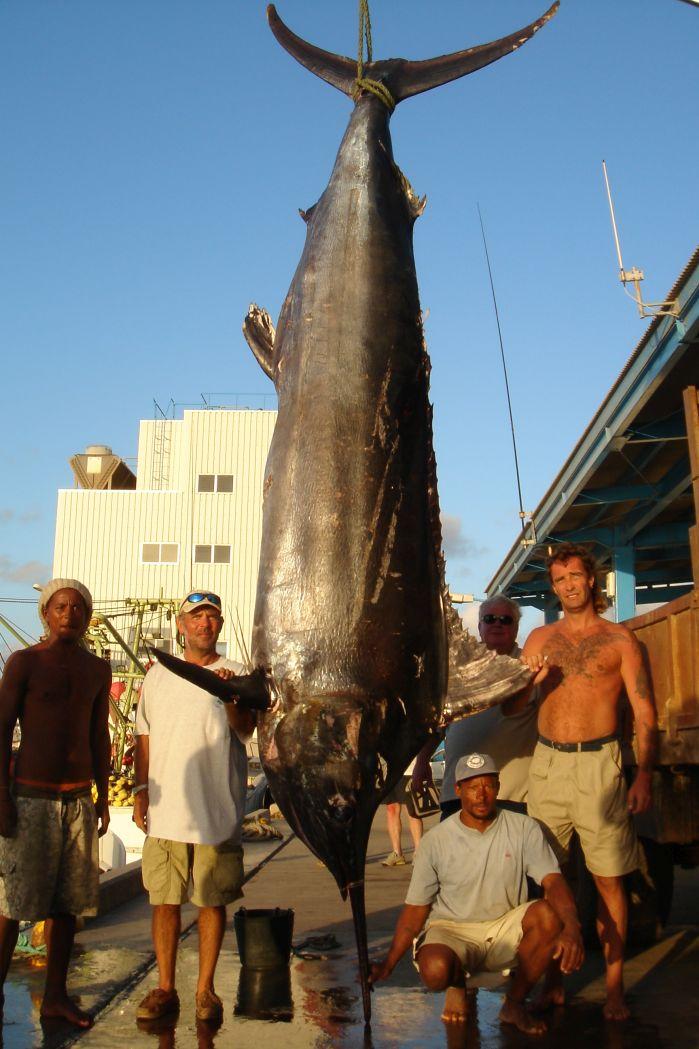 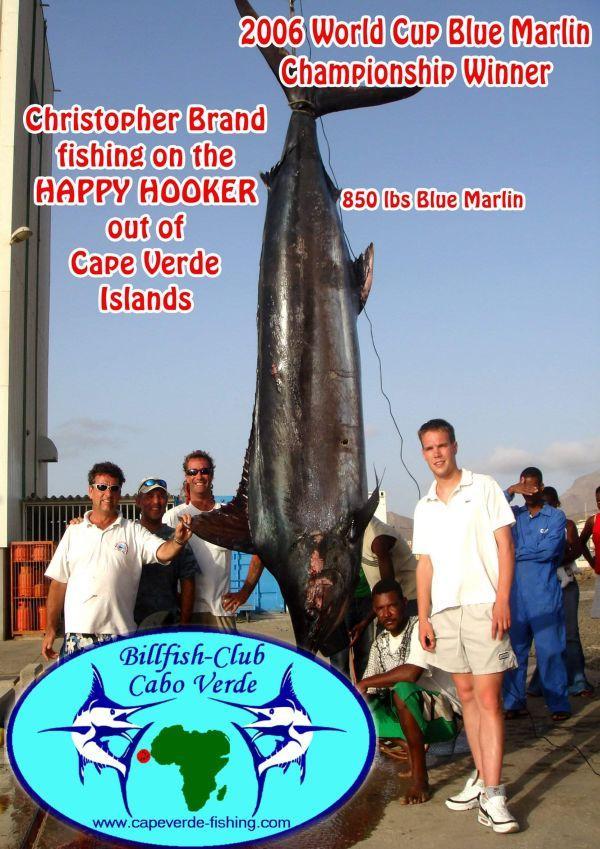 (RL) – The Blue Marlin World Cup is fished all over the world on the 4th of July every year. This year’s winner was the boat Happy Hooker (Cabo Verde) of the German owner and captain Berno Niebuhr (see Blinker 04/2002). On board was also the English captain Simon Bracey (see Blinker 11/2003). The catcher was the American Christopher Brand, the bait was an Andromeda trolling lure, designed by the legendary English captain Roddy Hays in Big Game circles. According to Berno Niebuhr’s report, only about two hours after the start of fishing at 10:37 a.m., a huge marlin appeared at the stern of the boat and attacked the Andromeda marlin lure. The fish first stayed on the surface and shook its head frantically. Then the fish fled and started jumping. Berno realised that the fish weighed over 300 kilos. Christopher was immediately in the fighting chair, but only after the boat had gone two nautical miles backwards was he able to gain line. At 11:30 the first gaff was finally set, shortly afterwards the second… In the harbour the fish was weighed: 386 kilos! But many tense hours passed until the anglers off Hawaii were also finished, because the competition ends exactly at 16:30 in each time zone. It took until 00:30 Cape Verde time for the magic announcement to finally come from Tournament Official Jim Hardie. Berno is especially happy about the long-awaited win, because now it is finally proven: Cabo Verde is one of the best Blue Marlin spots in the world – and the Happy Hooker team is also world class. 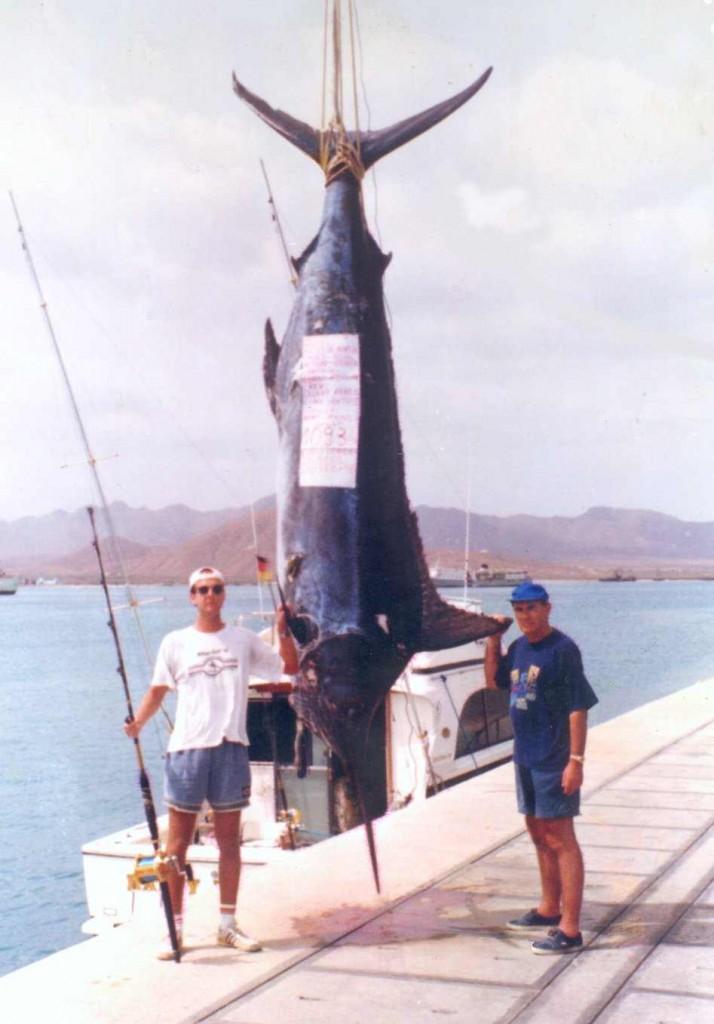 About ten metres behind the boat, the blue marlin jumped out of the water as if in slow motion. Again and again it showed itself in all its size. I suddenly felt very small and weak in the fighting chair and called to the captain of the “Happy Hooker” on the bridge: “Berno, how can I ever get him out?” But Berno was far too busy, pulling and pushing the four levers for throttle and gears to keep tension on the fish: The marlin had pulled 600 metres of line from the 80-lbs reel in a sudden run after the aerial acrobatics, only to turn around, swim towards the boat and dive off into the depths. Deeper and deeper and deeper until I could barely keep the rod away from the side of the boat as it got darker and I got more and more cramped.

But that was why I had come here with my father: For the blue marlin, for which Captain Peter of the Bibiche even gives a catch guarantee. Yet everything had started under such bad omens: We had planned five trips in just one week. The first one on the day of our arrival was half cancelled due to a delay of TACV (Cabo Verde Airlines). This first half day off São Vincente, however, brought wind apart from a wahoo. The wind picked up over night so that the second and third days of fishing were cancelled due to storms and the mood on our mother ship “Irene” fell into the basement.

On Wednesday, the “fourth” day, we went out in the morning in choppy seas. After a 20 kg wahoo, my first long-awaited marlin bite and drill came at noon. The 200-pounder took 300 metres of line in the first run and was tagged by Berno after 25 minutes. Two hours later it was my father’s turn, also with a fish of 200 pounds. And Peter’s guarantee had also come true on the Bibiche, the three anglers from northern Germany had their first marlin. Shortly after 4.30 p.m. , we were almost on our way to the mother ship in the bay, when the bite came. The fish took little line and I still had no idea what it was when Berno, who could see the marlin, already shouted from the bridge: “Mark watch out, that’s a big one!” – And there I sat an hour later:

Cramped, trembling and without strength in my arms. But Berno was just super and without him I certainly wouldn’t have landed the fish. He made me laugh, encouraged me and kept changing the angle to the line and thus the pressure on the fish with constant boat manoeuvres until the marlin got too stupid and came back to the top. After a final fight for 100 metres of line and a total of two hours of drilling, the crew could gape at the marlin. The next day, the scales in the harbour showed 1093 lbs.

Do you have any questions?

Contact us
Scroll to top
Manage cookie consent
In order to provide you with an optimal experience, we use technologies such as cookies to store and/or access device information. If you consent to these technologies, we may process data such as browsing behaviour or unique IDs on this website. If you do not give or withdraw your consent, certain features and functions may be affected.
Manage options Manage services Manage vendors Read more about these purposes
View settings
{title} {title} {title}